Arrived at 3 to find 6 others in the venue – Jessie, Ms. Ong, Tony, Ricky, Marlon and of course the host Hubert himself; all playing each other. The practice field was for once very strong, with 5 GMs around, and some uncommonly seen at practice!

I started playing after a while (when their games ended), and played 6 games in total, the 5th being against Hubert juggling two boards (against Tony and me). I’ve yet to look through all of the games but I lost 2 of them, phonying twice in total (one being an embarrassing 4 letter word) and giving many challenges away.

Attendance-wise, Marcus came towards the end of my first game, and was my second opponent – Ricky, Marlon and Marcus left after my 3rd game, leaving an odd number of players. Jessie and Ms. Ong left in the midst of my 5th game. Li Wei and Guanhui were both expected but did not turn up eventually.

After my 6th game against Tony (my third against him), Tony suggested that we (the 3 of us left) try a doubles variation (which supposedly originates from the US of A). In short, this would involve 4 players (due to the shortage of players Hubert and I played against Tony) where each player would have their own rack. Turns would be played by team – the team could choose who would go first, and the second player would immediately follow after the first. This would allow for setups and complementary play. We played 2 games of that – more of that later.

Tony doing some postgame analysis – there was an interesting endgame here, might discuss it if I can get the .gcg file! 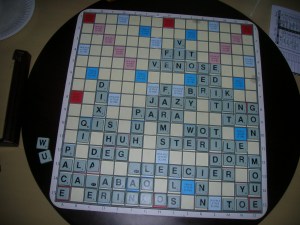 Board against Marlon, which ended up rather blocky (Marlon passed once at the end). Marlon’s nice fLEECIE was met with a single R back hook from me for 24 points. His CArABAO was met with a higher scoring 5-hook ERINGOS. 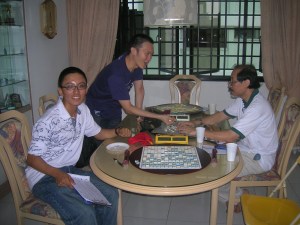 Hey, the two of them were supposed to be looking at the camera! 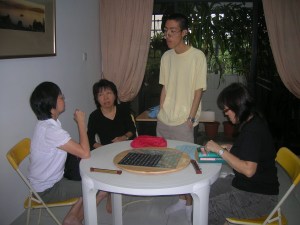 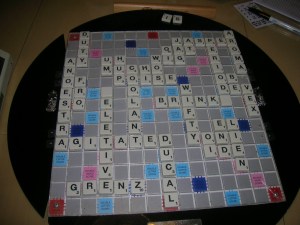 I think I lost this game (to Tony) because I played JAS(P)E instead of JAA(P)S, giving him the easy hook – 3 bingos for him and 1 for me.

Game against Hubert, where both of us made a few glaring mistakes each

Some revenge against Tony… I almost had a playable o(X)TONGUE that was blocked by his FR(O) for 14 points. I was lucky I couldn’t play it though – he’d have JETS/(oXTONGUE)S as a counter for 105! 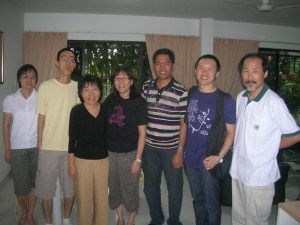 Rare Singaporean Group Photo #2, with the inclusion of the fan this time